1621
Pilgrims folded hands to pray.
Have we forgotten?
Thanksgiving bids us return.
Now thank we all our Maker.
c2010 by Linda Ann Nickerson 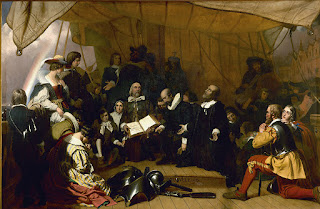 Artwork:
Embarkation of the Pilgrims
By Robert W. Weir
(1844)

Feel free to follow on Google Plus and Twitter. Please visit my Amazon author page as well. 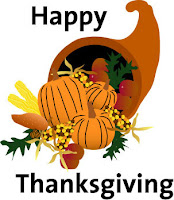 Just for fun, I tried concocting a “Big Day Poem” to celebrate Thanksgiving.
Here is a Thanksgiving Senryu.
Instant Recall
I am so thankful,
Blessings greater than my woes
Let me not forget.
Have a happy Thanksgiving!
Want to write your own "Big Day Poem"? Check it out, and see what you can produce. CTRL-click on the title (above) to open that poetry site in a new internet window.

Share
Posted by LA Nickers at 10:10 AM No comments:

On Writing Copy-Wrongs
Web writers are cringing – all over the blogosphere. Last month, Monica Gaudio learned that an article she had copyrighted and published in 2005, titled “A Tale of Two Tarts,” had been copied and reposted (read: plagiarized) by an editor at Cook’s Source.
Confronted, Cook’s Source editor Judith Griggs apparently rebuked Monica Gaudio, claiming that anything published on the internet was public domain and fair game.
Here’s a quote, cited (and attributed to Cook’s Source editor Judith Grigg) on Monica’s own blog:

“But honestly Monica, the web is considered ‘public domain’ and you should be happy we just didn't ‘lift’ your whole article and put someone else's name on it! It happens a lot, clearly more than you are aware of, especially on college campuses, and the workplace.”
In addition, Judith Griggs supposedly told Monica Gaudio that her original article had required considerably editing, for which the writer ought to remunerate the errant editor.
Not so!
Finally, Cook’s Source issued an apology to Monica Gaudio and took down the pirated copy.
As a web writer (with several thousands of copyrighted and published titles and photographs online), I am personally frustrated and professionally alarmed to find my own material reprinted without my permission and sans licensing every week. Of course, legal measures may be taken after such infractions occur.
Still, we have to wonder … didn’t these copy pirates learn anything about sourcing in school? Aaaargh!
The Cook’s Outsource
(Limericked Signs on Plagiarized Lines)
As writers, by fits and by starts,
We publish our liberal arts.
Dear Monica G,
How could one foresee
The piracy cooked up by tarts?
Your history/recipe cute,
Reprinted as forbidden fruit –
Raised heckles and harm
To sound an alarm.
May reprinters bear disrepute.
Bad apples appear everywhere,
As web writers publish, beware.
Inside such dark souls
No conscience patrols.
They operate not fair and square.
Professionals publish to read
And copyright ethics must heed.
But hacks try to steal
What truth may reveal
And so we must banish their breed.
c2010 by Linda Ann Nickerson
Posted for these prompts:
Monday Poetry Train (poetry)
Weekend Wordsmith (“inside”)
Artwork:
Girl Eating an Apple
By Godfried Schalcken (circa 1675)
Public Domain – copyright expired

Share
Posted by LA Nickers at 9:37 AM No comments: